Leave it to an artist to draw inspiration from some of the most minuscule of muses. For Shiyuan Xu, a sculptor from Hangzhou, China and one of two artists in residence at the Lawrence Arts Center, her inspiration has largely come from subjects on the microscopic scale, unable to be seen by the naked eye.

In Xu’s second-floor studio at the Lawrence Arts Center, various porcelain sculptures inspired by microorganisms are placed throughout the space in preparation for her upcoming exhibition, “Envisioning Invisibility.” Xu herself is hardly invisible in the studio because of the glass front to the room, which makes her and her work fully visible to the public. 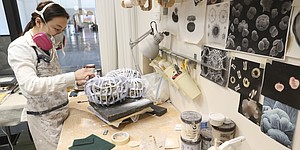 Lawrence Arts Center artist in residence Shiyuan Xu works on a piece for her upcoming ...

She affectionately refers to the space as “the fishbowl.” From first glance, it could easily be mistaken for a biology lab with all of her printouts of microorganisms on the wall.

“I really like to look at the single-cell microorganisms like diatoms and radiolarians,” says Xu. “For me, the amazing part is that even though they are on a really, really tiny scale and their overall form is simple, their inside structure is kind of crazy.”

Xu pulls a book, “Seeds: Capsules of Life,” from a nearby table. The book displays vivid imagery of seeds and their complex and intricate structures.

“I came across this book in the school library when I was an undergrad,” she says. “I was totally blown away. (This) was my entry point to looking at things on a microscopic level.” 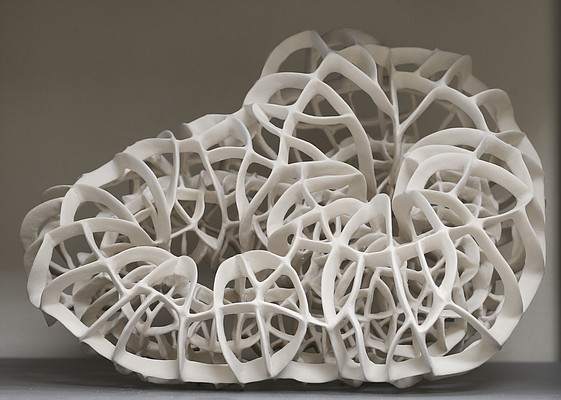 On Monday, while wearing a ventilator, Xu is sanding a delicate skeletal sculpture made from paper clay. The piece is among many she has been working on since her residency began last August.

In many of her sculptures, the structures she has envisioned exist by themselves. In others, Xu uses a light blue glaze to connect multiple structures and also as a means for creating movement within her work.

She explains that her intent with her art is to establish a familiarity to a certain degree by referencing the natural world and the structure of microorganisms, but also to keep her sculptures abstract enough that people can relate them to other things. 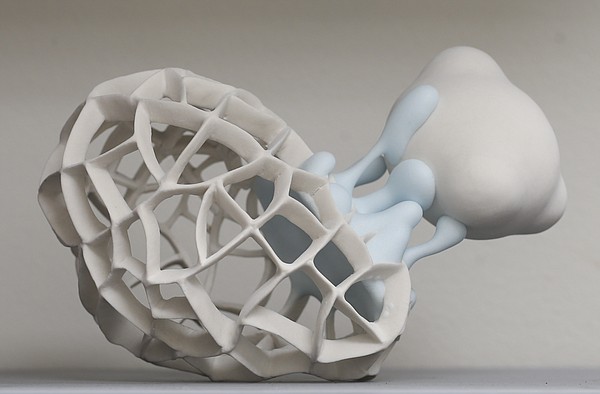 “I’m open to that,” she says. “I guess I just want to activate the viewer’s curiosity.”

Xu’s exhibition will open to the public on June 29 and will run through July 21. Xu will also give an artist talk at 7 p.m. July 11 at the Arts Center.