When I think of the Lawrence Public Library, I think video games. Some people won’t like that, but I can’t help it. At the library, we have a killer game collection. And it just got killer-er with the addition of Nintendo Switch games.

Nintendo’s little system that could is off to a great start. In just over a year, the handheld/home console hybrid has moved more systems than its predecessor, the (underrated) Wii U. But the sales wouldn’t have come without some great software to back it up.

Nintendo celebrated the 31st birthday of "The Legend of Zelda" by releasing one of the series’ most ambitious (and critically acclaimed) games yet. "Breath of the Wild" (Wii U, Switch) takes place a century after a catastrophic event wreaked havoc on the kingdom of Hyrule. I immediately fell for the beautiful Studio Ghibli-esque world, but even more praiseworthy than the art direction is the amount of freedom "Breath of the Wild" gives its player.

After an expertly crafted introduction, you’re free to climb, run, ride, and glide anywhere you see. People have sprinted through the game in less than an hour, while others have taken their time and played for hundreds. The game’s not perfect; I miss classic "Zelda" dungeons and tools, but for me that small complaint pales in comparison to the game’s living, breathing and incredibly fun world that’s stuffed to the gills with puzzles, challenges and lovable weirdos.

If you love fantasy, but want something a little less joyous, put a hold on "Dark Souls Remastered," out this May. The series is known for its punishing difficulty, but the "Souls" games are more than exercises in masochism; their intricately designed, nightmarish fantasy landscapes are populated by wildly inventive monsters that can now ruthlessly kill you on the go.

Prefer something with a little more futuristic bent? Dust off the old Nintendo Wii (or Wii U) and step into Samus Aran’s space boots. It’s been over 30 years since the original "Metroid" blew the gaming community’s collective mind by revealing that the blocky orange robot that just saved the universe was actually a woman (very progressive for a video game in 1986). The "Metroid Prime Trilogy" (Wii/Wii U) is a collection of atmospheric, first-person, exploration-focused shooters and a great warm up for when "Metroid Prime 4" finally comes out on Switch (not soon enough).

If you need a sci-fi shooter for your Switch right now, things don’t get much more intense than "DOOM." It’s a reboot of the classic demons on Mars — you read that right — first person shooter. Its frenetic, propulsive gameplay rewards you for attacking aggressively. If you’re squeamish, this may not be the game for you; it is very violent.

And there are just so many other great games. "Mario Kart 8 Deluxe" — probably the best go-kart-racing game since its predecessor "Mario Kart Double Dash." "Arms" — Nintendo’s newest and screwiest franchise, which has you boxing with elastic, you guessed it, arms.

"Splatoon 2" remains one of the most creative and unique shooters I’ve had the pleasure of playing. Instead of racking up kills, your goal is to spray ink wherever you can. At the end of the match, a cat named Judd tallies everything up and whichever team has inked more turf wins. If you prefer a series that’s a little longer in the tooth, "Kirby Star Allies" takes the power-sucking pink puffball and pairs him with three partners. Whether those are controlled by the computer or your friends is up to you. 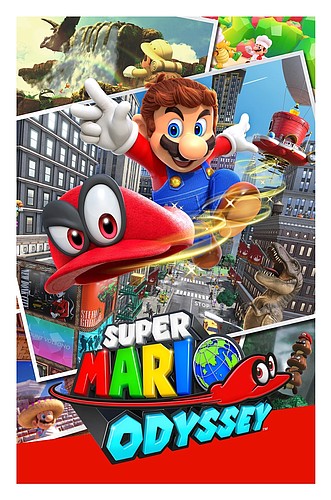 And last but certainly not least, I’d be crazy not to mention "Super Mario Odyssey," one of the best Mario games to be released yet. Taking pages from "Super Mario 64" and "Super Mario Sunshine," you’re dropped into wacky digital playgrounds brimming with things to do. Woo a monster. Do some 8-bit platforming in a poncho and sombrero. Escape a rampaging T. rex ... on a scooter. And much much much more. In addition to classic Mario running and jumping, "Odyssey" introduces Cappy, a ghostly hat that allows you to possess dozens of the game's inhabitants, which opens up brand new styles of play that never disappoint. Except for maybe the pine tree. The pine tree just moves very slowly.

You still want more games? We’ve got them, but you’ll have to check them out yourself. What are you waiting for?

— Ian Stepp is an information services assistant at the Lawrence Public Library.